Tah dig. A magical word. A food for gods. I learned how to prepare the rice dish Tah Dig by asking Iranian friends countless culinary questions – and from the recipe on my favorite Persian blog, Turmeric and Safron. Tah Dig: Persian preparation of rice that sings the praises of the seemingly simple, white grain. 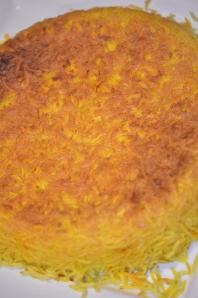 The dish uses long grain, white rice – preferably purchased in a big, brown burlap sack from my preferred Middle Eastern store in Albuquerque, Cafe Istanbul. The store is owned by a kind Palestinian family. The mothers and daughters are always willing to answer any queries about all food and preparation Middle Eastern. 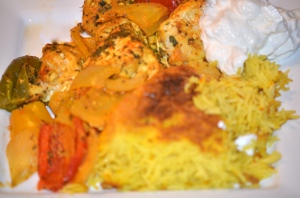 Last night, I prepared savory Tah Dig – along with Persian-style marinated kebob that showcase the many beloved spices of the region. A medium bodied, smooth red wine paired well – in this case, a Bordeaux. A light, well-spiced eggplant and tomato salad was served before the meal when the challah was cut. Lest we forget the buttery, eggy challah – It is Shabbat, after all! The meal was finished with dark chocolate (as most meals are!) – a delicious bar given to me by my husband. A gift of wine or chocolate never fails to please the proprietor of Casa Curls and Carrots! 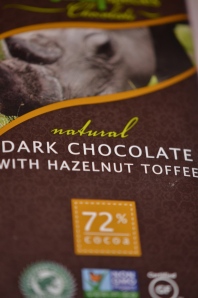 Shabbat is the Jewish sabbath and begins at sundown on Friday night. It is a night separate from, and elevated above, all other nights. Dinner is no exception. Persian cuisine is quite appropriate for this Jewish meal – Hebrews settled the world over during diaspora, and the Middle East is no exception. Most Jews who settled in the Middle East were expelled from Spain in 1492; they are called Sephardim. Many settled in Turkey, thanks to the kind King of the Ottoman Empire (now Turkey). 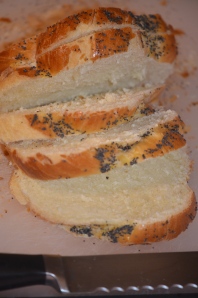 European Jews are referred to as Ashkenazi and are more common in the United States. Like Ashkenazi fare, Sephardic dishes reflects the region of settlement. It marries the rich flavors of the Middle East  (Rice! Apricots! Turmeric! Saffron!) with traditional Jewish foods passed down for generations. Challah and wine are two uniting foods of Shabbat for most Jewish people – not at all unwelcome!

When I first graduated from university at the age of 21, I worked in a small store as a shop girl. There was a severe economic recession and jobs were scarce – one took any job that was available, regardless of pay or prestige. The owner of the shop was a kind and generous man with a stoic, hard-working wife and many children. My boss was a Persian Jew – he spoke English, Persian and Hebrew. His family prepared the dulcet foods of their home, Iran. The family was the first Iranian Jews that I had met. The shop owner gave me a job when I desperately needed one, though he probably didn’t need additional help at the time. I think of this sweet family – and the warmth they showed me – when I make Tah Dig for Shabbat dinner. 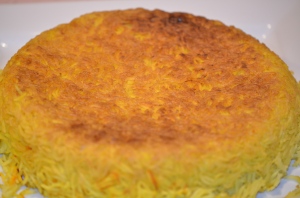 Initially, I prepared Tah Dig on the stove top. These days, I usually prepare Tah Dig using a Persian Rice cooker. It is a no-fail, quick method! Following the instructions of the shop owner at Cafe Istanbul, I use chicken stock, butter, salt, saffron and just a touch of turmeric. In medieval Europe, turmeric was referred to as as Indian saffron. It was commonly used as an alternative to the expensive, precious saffron spice.

This rice cooks by steaming, so little liquid is required – about a 1:1 ratio of rice to chicken stock. A normal preparation of rice calls for a 1:2 rice to liquid ratio. 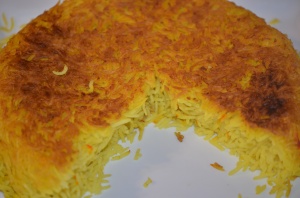 Crunchy on the outside, soft and succulent on the inside: this rice dish sings saffron and turmeric’s praises.

a few pinches of fine salt

a small pinch of turmeric